We arrived to Lima on Sunday evening, and we are staying in a beautiful little boutique hotel called Casa Nuestra in a part of the city called Barranco. Barranco is a modern neighborhood that used to be the center of Bohemian life. It is now full of trendy bars and restaurants, and it is also famous for its beautiful street art. A famous little landmark in Barranco is a bridge called Puente de los Suspiros. According to the legend, if you manage to cross the bridge while holding your breath, you can make a wish that will come true.

Barranco is next to another famous  neighborhood in Lima called Miraflores. This is a rich and modern part of the city where most of the tourists (as well as wealthy inhabitants) prefer to stay. In Miraflores, you can also find a famous archeological site and ceremonial center that dates back to AD 400. It is called Huaca Pucllana. Until it was discovered very recently in 1981, it was just a hill where people were practicing motorcross or climbing up to enjoy the view and the sunset.

It turns our the hill is actually a 25m tall, huge pyramid-like structure. It consists of millions of adobe bricks (bricks made of mud and dried under sunlight) that are placed vertically aside of each other. This was a technique that was known to withstand earthquakes (since Lima and Peru is an active seismological area). Excavations are still ongoing, and they estimate it will take another 50  years for archaeologists to excavate the whole area. We entered the area on a guided tour, which was very informative and interesting. In Huaca Pucllana there is also a famous restaurants with delicious food and good drinks that offer spectacular views to the site through its panorama windows.

On our next day in Lima, we visited the city’s historical centre. Plaza de Armas is a beautiful, 140m2 square surrounded by historical buildings, such as the cathedral of Lima and the governmental palace. We were lucky enough to be there at noon, where they have a daily ceremony for the changing of guards, involving goose-stepping guards and an orchestra playing the famous Peruvian song ‘El Condor Pasa’.

Close to the Plaza de Armas, you can also the very impressive Convent of San Francisco. The convent is full of mosaic tiles from Sevilla (similar to what you can find in the Alcazar in Sevilla and La Alhambra in Granada). It also has large, beautiful paintings in the ceiling and an impressive wooden cupula originally built in 1625. But the main reason why this convent is popular for tourists is the catacombs under the church. You can find more than 70.000 skulls and human bones here, since these catacombs were once the main burial place for the city’s Christian residents. Unfortunately it was not allowed to take photos neither of the convent nor of the catacombs.

We have also enjoyed delicious food in Lima. In the restaurant El Pacífico near Plaza de Armas, we had ceviche, the Peruvian national dish made by fish cooked in lime juice and served with corn and sweet potato, and lomo saltado (juicy strips of sirloin stir-fried over pieces of tomato, bell pepper, onion and potato wedges.)

On our final day in Lima, we visited the famous handicraft store called “Artesanías Las Pallas” in Barranco. It is run by an old lady called Mari Solari, who was originally born in Wales, but she fell in love with a Peruvian and has now lived in Lima and run this shop for more than 37 years. She really appreciates the craftmanship of traditional Peruvian handicrafts, and she works with local artists all over Peru. Items in her shop are generally of much higher quality than what you can find in the traditional street markets.

We also visited Parque del Amor in Miraflores. This is a beautifully situated park on the cliffs next to the sea, full of small, colorful mosaics and romantic poems and words. The park is inspired by Antoni Gaudí’s Park Güell in Barcelona.

On our last evening, we visited a great restaurant in Barranco called La 73, where we had a delicious dinner. Rattikan had a risotto with scallops and squid and I had a risotto with sous vide pork tenderloin. We can definitely recommend both dishes.

We are now at the airport in Lima waiting for our flight to Cuzco, where we will spend the next 5 nights. We will also visit the famous ruins in Machu Picchu.

Update after returning to Lima

We returned to Lima for a couple of nights at the end of our trip and we stayed at the same boutique hotel in Barranco. There was now a pleasant Christmas market in the municipal park in Barranco, where we bought traditional Peruvian Christmas ornaments such as Christmas balls made from dried gourds that are painted and carved with colorful drawings.

We also visited El Circuito Mágico del Agua. This is a large park with fountains illuminated by projectors and lasers which are accompanied by music – a truly impressive experience.

Some tips for Lima and Peru 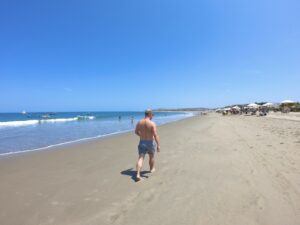 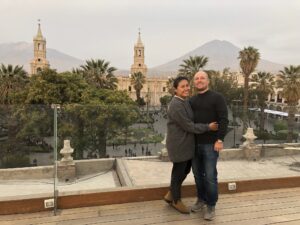 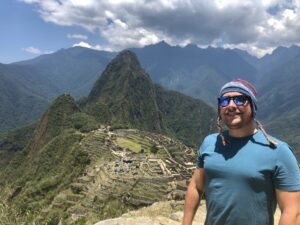 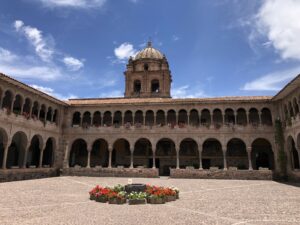